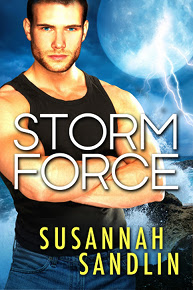 Whether it’s fangs, fur, feathers, or fins, we love our paranormal heroes. Think of the tropes that have become the standard fare in the books we love: sexy, tortured immortal falls for human girl (a choice that might prove deadly); a woman reaches a milestone/finds an object/inherits something that brings out heretofore-latent supernatural powers (and there’s probably a demon after her); paranormal slayer/hunter/enforcer falls for the fill-in-species-here woman he’s supposed to be killing.

Whether it’s a closed world where the paranormal critters are unknown to humans, or an open world where everyone lives in not-quite-harmony, the humans are, well, human. Bleh. They might be a strong foil, like Karin Murphy is for Harry Dresden, but they’re secondary characters. Not heroes. Certainly not romantic heroes.

Which is where Jack Kellison and I ran into some issues.

My new novel Storm Force (written as Susannah Sandlin) features a top-secret counterterrorism team made up of both humans and shapeshifters. Three Army Rangers, a female eagle-shifter who serves as a tracker, and a pair of black-jaguar-shifter brothers who provide the muscle. When I look at that list on paper, my first instinct was to make one of the jags my hero, or even both. I mean big cats are too sexy for their skins, right? And two are better than one.

But Jack Kellison, aka Kell the Army Ranger, refused to cooperate. This was his unit, damn it, and he was going to be the hero, even if he was a human soldier with a bad back who pops ibuprofen like Tic-Tacs. Even if his eagle-shifter teammate Robin, who weighs ninety pounds drenched in swamp mud, can bench press twice what he can (and reminds him of it frequently). Even if the book’s heroine, Mori, isn’t human at all.

I can’t say what she is without spoilers, but let’s just say that when Kell (thinking she’s human) handcuffs her to the hotel room sink while he takes a shower, she could have left any time she wanted. She was just staying to enjoy the view.

What can a human hero bring to the table in a paranormal romantic thriller? (Yes, I made that genre up, trust me.)

–Kell brings passion to his work, along with a reckless disregard for his own safety. He has a deeply ingrained hero complex, and telling him he can’t do something will pretty much guarantee he’ll do it or die trying.

–As a human, Jack’s political agenda is simple: do his job, do it well, protect the people he loves, and make sure he can live with his decisions at the end of the day. Paranormal critters have so much baggage!

–For what he lacks in comparable physical strength, Kell compensates as a strategist. He’s well-trained as a Ranger; he thinks on his feet; he trusts his gut.

–He knows his way around the human legal system, which comes in handy when dealing with shifters who are accustomed to making and following their own laws. When their laws collide with ours, Kell is a good guy to have around.

As an author, it has been a challenge to keep Kell dominant when he’s surrounded by shapeshifters who are bigger and badder than he’ll ever be. But he’s got a big-enough ego to hold his own, Mori is learning to trust him, and he has a cross-eyed Catahoula hound named Gator and a one-room cabin in the Louisiana swamps. What’s not to love?

Want to try a copy of Storm Force? I’ll give away a copy to one commenter or, if you prefer, a signed print copy of a book from the Penton Legacy paranormal romance series (Redemption; Absolution; Omega) or from the Sentinels of New Orleans urban fantasy series (Royal Street; River Road).

Have you read a book with a human hero/paranormal heroine? How did the guy keep up with the paranormal characters?

About Storm Force: As leader of the elite counter-terrorism team Omega Force, former army ranger Jack “Kell” Kellison is always focused on getting the job done. So when a Houston high-rise is bombed and the governor killed or missing, Kell’s mission is clear: infiltrate the group suspected of the bombing and neutralize the threat by any means necessary. But once Kell meets chief suspect Mori Chastaine, he realizes there’s more to this case than meets the eye. And more to Mori than any man—any human man—could imagine….Mori Chastaine is running out of options. Suspected for a crime she didn’t commit, forced into a marriage she doesn’t want, she sees no escape—until Kell walks through her door. A lifetime hiding her true nature warns her Kell might not be who he seems. But he could be the only one able to help save more innocent humans from becoming pawns in an ancient paranormal power play. If Mori reveals her secret, will Kell join her fight? Or will she become his next target?

Note: Storm Force is currently being offered by Montlake Romance as a $1.99 Kindle Serial. On July 9, it also will be available in print, digital and audio from other vendors as well as Amazon.

48 thoughts on “Human Hunks in a Paranormal World”