After romance, my next favorite genre of books is mystery.  I like historicals, cozies, I like noir—I love hard-boiled alpha-inspectors like Ian Rankin’s Rebus or Martin Cruz Smith’s Renko almost as much as I like a hardened warrior-vampire.

But it’s funny, when I get to the end of a mystery novel, I rarely care about whodunnit.  I only care about my inspector, and maybe his girl.  (*smacks forehead* I guess that’s why I write romance.)

So why do I keep reading mysteries?

I think it’s the journey into a dark world, with wide-open possibility.  Mystery authors promise me they will leave no stone unturned, and I will see into the shadows of working class Glasgow and post-Soviet Russia.  With my alpha-inspector guide, anything can happen, anyone could turn out to be other than they seem, the allegiances, the very foundations of the detective’s world could shift at any moment—and this feels true to me.

It’s the same reason I write paranormal romance.  Because I believe in Mystery with a capital M.  I believe we don’t know everything there is to know.  When it comes to aliens, yetis, the Lochness monster, ghosts, the Virgin Mary appearing on a slice of toast—I’m as hard-boiled a skeptic as Renko and Rebus.  (Of course, I believe in vampires because I’ve met Andre Maras in person, and I’m fifty-fifty about the existence of werewolves—persuade me in the comments and I’ll give you a book!)

But, mostly, I delight in all that we do not know about the world around us and the one inside us, the human psyche.

As a genre, paranormal fiction allows authors and readers use the full range of their creativity to explore life’s Mysteries. 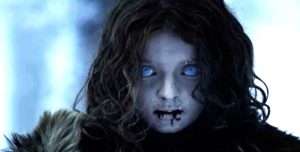 In normal life, humans use science, magic, religion, and mythology to explain the Mysteries.  And these are the same colors on a paranormal author’s palate, which allow us to paint the world of our books.  Think about the subtle mixture of magic and science Diana Gabaldon weaves through Outlander, or the mythology George RR Martin constructs to scare the bejeezus out of us with those White Walkers.  The last season of True Blood on HBO did some fascinating stuff with the Lilith myth—whoa, she was scary—and the blood lust and vampire supremacy her mythology spawned was downright frightening. Hhmm. A racial supremacy myth that resulted in enormous bloodshed and slaughter.  Sounds familiar.

I’m a working mom and a writer, so when I find time to read, I want it to be something fun.  And yet, the dark, serious themes always pervade paranormal.  These days, I’d rather not read a heavy nonfiction book.  But take off Alexander Skarsgard’s shirt and smear him in blood, and I’m willing to contemplate the horrors of genocide.  Maybe that sounds glib, but I mean it.  There is a safety in fiction.  We know it’s not real.  And yet, if we didn’t think it was true, we wouldn’t bother.  And so it is while watching True Blood, instead of reading Elie Wiesel, that I will consider how good creatures can be tempted to do evil. Will I find an answer?  Probably not, only deeper things to think about, and that’s fine with me.

And in the meantime, I am enormously happy to read and write in a genre that’s Mysterious, entertaining, titillating, and still provokes deep thoughts.

I’d love to hear from you!

What Mysteries fascinate you?

Which authors that you enjoy explore deep truths?

Have you ever met a werewolf?

And seriously, if you can convince me to believe in werewolves, I will give you a copy of Blood Vine! (Okay, I guess it would only be fair to do a real giveaway, and enter everyone who comments or tweets this post!)