It’s RITA time on Paranormal Unbound! Throughout May & June, we’ll be spotlighting some of the Romance Writers of America ® RITA award-nominated paranormal romance  authors and their books. Today, I’m talking about one of my recent reads, Sharon Lynn Fisher’s Ghost Planet. 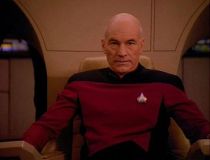 I grew up on science fiction. First it was Star Trek: The Next Generation. Every Monday night, it was a family tradition: We’d pile onto my parent’s bed with frozen lemonades and listen to Captain Picard say, “Make it so.” I read Invitation to the Game so many times the cover nearly fell off, and as soon as I was old enough to buy books for myself, I devoured every one of Anne McCaffrey’s Dragonriders of Pern novels. 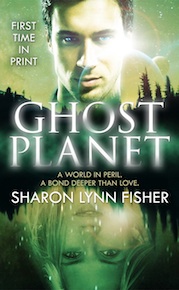 Why, then, has it taken me until now to discover science fiction romance? It’s so obvious. Chocolate and strawberries, peanut butter and jelly, horse and carriage—you get the idea. The mix of space operas and sex should’ve been irresistable, but I’m ashamed to admit that Ghost Planet, which is up for a RITA for best first book, was the first science fiction romance I’ve read.

I’ve got a thing for brainy heroines, and Elizabeth has a Ph.D. in psychology. That degree isn’t just wallpaper, either—the plot hinges on her ability to research the peculiarities of her new planet and figure things out. The hero is no intellectual slouch, either, and I loved that the chemistry between them was sexual and intellectual. Take, for example, this exchange:

My hand shot out, grabbing a fistful of shirt, and I pulled him down onto me. “I need you right now.”

He pinned my wrists down to the bed, lowering his lips to my ear. “Response to stimuli confirms sufficient level of arousal.” I could hear the smile in his voice.

Another thing that made my geeky little heart melt was Fisher’s accurate use of biological concepts. As a biologist myself, I loved that Elizabeth cited theories about the role of symbiogenesis in evolution and got them right. Sure, Ghost Planet‘s premise is a little outlandish, but that’s the fun part of spending time in an alien world, and Fisher totally makes it work.

Nerdgasms aside, the best part about Ghost Planet was the smoldering chemistry between the leads. I was fascinated by the fictional planet where the story was set, but it was the progression of Elizabeth and Murphy’s relationship that kept me up past my bedtime.

What about you, dear readers? Have you devoured any fabulous science fiction romances lately?