I was delighted to see Kristen Callihan’s books on the list of RITA nominees this spring.  I’ve had my eye on them since I saw the stunning cover for Winterblaze (the third book) and this series merges my two favorite genres—historical and paranormal.  When we decided to do RITA month here on Paranormal Unbound, I had a reason to move them to the top of my to-be-read pile.

In case you missed Callihan’s double whammy, Firelight was nominated for best first book and Moonglow for best paranormal romance.

Firelight is truly original, with a paranormal hero unlike any I’ve read.  The reader and the heroine are 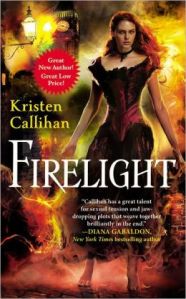 kept in the dark for most of the book as to why the mysterious Benjamin Archer wears a mask, and believes himself to be unlovable and dangerous to his heroine Miranda.  I certainly won’t spoil it for you, but there are plenty of well-crafted red herrings that had me guessing wrong.  When the revelation of Archer’s nature finally comes, it is utterly perfect for the Victorian context of Callihan’s Darkest London.

Callihan has a knack for plot, she turns pretty phrases, and her prose is clean, with just the right amount of historical flavor for this type of book.

Speaking of historical context, Callihan’s heroines are not well-to-do Victorian noblewomen but from a fallen middle class family.  They are gutsy, sympathetic, experienced and have paranormal powers to match their heroes. While the typical social and economic concerns that make historicals “historical” are at play, these books do not rely heavily on those conflicts.  That fact and the really excellent world building make them interesting and accessible to readers who normally don’t love the historical genre.  The success of this hybrid series excites me; I hope to see more crossover like this, because it makes for so many fresh stories.

I’ve seen the Darkest London series classified as steampunk because of its period, but nothing at all mechanical comes into play until the second book.  While I enjoyed Firelight, I adored its sequel Moonglow and found the chemistry between Ian and Daisy scorching.  It is a more traditional werewolf story, with a few shocking plot twists and the introduction of GIMs (Ghost in the Machine) who have clockwork hearts.  These creatures are intriguing and Callihan’s incorporation of them into the plot is masterful.

I liked the romance, the world, and the writing in Moonglow as much as any paranormal romance I’ve read in a long time.  The descriptions of the sense of smell were particularly vivid and the repartee between the main characters delighted me with is realistic, affectionate charm.

Even if you don’t normally read historical romance, I recommend the Darkest London series.  I prefer authors that give each book a satisfying end, while leaving you curious enough about the secondary characters to look forward to the next book. To that end, Callihan sets up Winterblaze nicely, and I am very curious how the third sister Poppy’s situation is going to resolve. I won’t be waiting until next year’s RITA nominees are announced to find out.

As always at Paranormal Unbound, we love for our posts to become conversations.

Have you read the series? What did you think?

Do you have other favorite steampunk or crossover books?  I’ve already confessed my worshipful adoration of both Gail Carriger and Meljean Brook.