I’m very excited to be diving back in to the Alpha & Omega series!  Have you read Patricia Briggs yet?  If not you’re missing out! 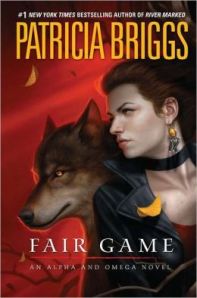 They say opposites attract. And in the case of werewolves Anna Latham and Charles Cornick, they mate. The son-and enforcer-of the leader of the North American werewolves, Charles is a dominant alpha. While Anna, an omega, has the rare ability to calm others of her kind.

Now that the werewolves have revealed themselves to humans, they can’t afford any bad publicity. Infractions that could have been overlooked in the past must now be punished, and the strain of doing his father’s dirty work is taking a toll on Charles.

Nevertheless, Charles and Anna are sent to Boston, when the FBI requests the pack’s help on a local serial killer case. They quickly realize that not only the last two victims were werewolves-all of them were. Someone is targeting their kind. And now Anna and Charles have put themselves right in the killer’s sights…

What I love most about this series vs. her Mercy Thompson series is the relationship between Charles and Anna.  Sometimes Anna comes off as soft, but when the tough moments come for Charles, she’s got strength enough for both of them. He’s the enforcer for America’s alpha. He’s got lots of pressure and he can’t let any of it show, but Anna knows and she fights to protect him.

For a werewolf she’s not super kick ass, but that makes her more real to me and it also makes those moments when she steps up to back up Charles when no one else will POP for the reader. You know how much she loves him because she’s miles out of her comfort zone. It’s also a nice change of pace for our genre where many heroines are over the top kickass… 🙂

Long story short, I’m having a great time sinking back into her world…  It’s a huge pleasure!

Is there a shifter novel or series you’re looking forward to?  Share… 🙂