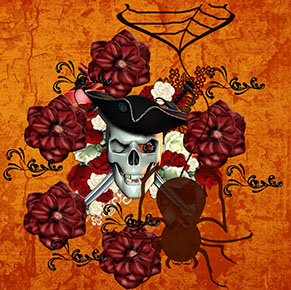 Writing is an odd occupation in my family of salt-of-the-earth Southerners. My people work hard for an honest wage, watch Southeastern Conference football on Saturdays in the fall, and take casseroles to church fellowships. My people don’t do weird.

Then there’s me. I spend my days writing and editing at a university―a vague concept among my family members but respectable enough since the school has a football team that plays in the SEC―and my nights writing novels. About wizards. And mermen. And vampires. Who—uh, you know, DO THINGS—with humans.

So, what is this crazy thing called Paranormal Romance and do people keep reading and writing it? I’ve been giving this a lot of thought recently as I get ready to attend the Romance Writers of America annual convention this week. I have a book proposal I’ve been working on that could swing toward paranormal, or it could swing more toward romantic thriller. I’d rather take it paranormal, because that’s what I do. But I suspect it’s more likely to sell to a publisher if it’s not paranormal.

Here are my highly unscientific theories as to why paranormal romance and urban fantasy are important, both to authors and readers.

―It lets us look at the human condition from a different angle. What if our jaw-droppingly sexy hunk of manhood hero never aged? What if he needed our heroine (literally) to live? What if he struggled at the loss of his humanity as he fought to contain the beast within him―a real beast? Every decision in our paranormal romantic relationship becomes amplified, has huge implications that could extend far beyond the scope of our couple and their families.

―It lets us indulge our taste for danger. There’s a good argument to be made that the most dangerous creature to walk the earth is man. But setting that aside, we all love a bad boy, right? Well, give that bad boy fangs, or make him a tortured soul who changes form every full moon and struggles to keep from putting your heroine on his dinner menu. We all think if we’re the right woman, we can change a man, right? Well, up the stakes and the danger for paranormal romance. Or what if he’s a nice, solid guy―real hero material―but our heroine has a paranormal flaw that could kill him if she doesn’t give him up? Big stakes, big emotion.

―It lets us test the mettle of the human spirit. Okay, that sounds really lofty. But most paranormal romance takes a human hero or heroine and thrusts him or her into a situation where only a noble spirit (and maybe a bottle of Jack Daniels) will see things through to the end. There are worlds to save, evil beings to conquer, the ultimate face-off of good and evil. In other words, the conflict is serious, and the stakes are big. (No vampire pun intended.) Yet at the heart of all the drama is the love between two people who, despite their vast differences, complete each other not only physically and emotionally, but on some metaphysical level. And since there’s often immortality at stake, it can literally mean love eternal.

―In addition to building deep, heroic characters, paranormal romance gives me the opportunity to let my imagination soar. To create worlds and whole systems of behavior that don’t have to conform to the laws of physics or reason. It lets me be weird and romantic, all at the same time, and find new ways of putting the idea out there that, at the end of the day, love is worth the struggle and the happily-ever-after even sweeter because of it.

So, what will I do with my proposal?

Currently my thought is to pull a Scarlett O’Hara and think about that tomorrow.

6 thoughts on “Happily Ever After–From a Different Angle”