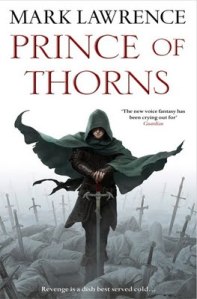 I’ve had this book hanging around for a while and only just got around to reading it. I bought it because, hey, it has a cool title! And I like revenge stories. And the first page didn’t bore me to death. Yay! That’s a sadly rare win in the bookstore for me.

I like this book a lot. It’s one of those new kind of fantasies where the ‘fantasy’ element is subtle. Remember the eighties, where ‘fantasy’ was all flashy and Las Vegas, with magic that sparkled in rainbows? No longer. Today the best fantasy is dark and covered in mud. And there’s plenty for darkness and mud in PRINCE OF THORNS.

It’s set in a far future, where the civilisation we know is long destroyed and replaced with something else. Jorg is a prince, but a terrible atrocity ripped him from his family, and now he’s the leader of a gang of vicious brigands. In the beginning, he had revenge on his mind. Now – for reasons we don’t yet understand – he’s killing and pillaging for its own sake. But now, fate leads him back to his father’s castle. Who’s to blame for the monster Jorg has become? Can he ever get revenge? And is he even who he thinks he is – or is someone behind the scenes manipulating him for their own ends?

It has a charming, darkly funny, interesting and believable narrator. It has twists and turns and well-placed flashbacks. It has beheadings and murders and lots of blood. And unlike some other recent fantasy books that unfortunately were ruined for me by trying to be too clever (ahem The Left Hand of God ahem) it has an ending that *means* something. It has closure, plus what-now.

if you’re into dark, realistic, violent fantasy, check this one out. I liked it!

6 thoughts on “Prince of Thorns”