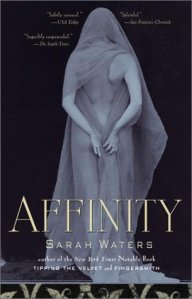 Hello, my name is Amber and I like historical fiction.

I’ve outed myself here before as a fan of Steampunk and other paranormal books that bleed into the historical genre. Today, I’m reading a piece of literary fiction by one of my favorite authors, Sarah Waters. I know it won’t be for all of you ParaUn readers, especially if you’re primarily a romance or UF reader, but maybe some of you will be interested.

Lesbians, ghosts, and a bleak Victorian women’s prison–what’s NOT to love?

Previously, I read two other of Waters’ books: the mysterious and gothic Fingersmith and the kinky and also sweet Tipping the Velvet. Both are beautifully written dark Victorian novels. Now I’m reading Affinity. Like the other two, it revolves around a lesbian romance, although it’s NOT a romance novel.

Unlike her other books, Affinity deals with a paranormal element: the nineteenth century religion Spiritualism.  I confess to being fascinated by Spiritualism as a movement, and the way society was so taken with séances and ghosts and the idea of receiving wisdom and comfort from beyond the grave.  I am really enjoying this aspect of the world building. Serena is a medium convicted of fraud and imprisoned. Visiting her in Millbank prison, the narrator Margaret falls in love with her very slowly. The reader, like the narrator, is never sure what to make of the woman’s supernatural abilities—is she a charlatan, sincere, or crazy?

Affinity is in every way a literary novel. It is slow, it evokes the period beautifully, especially the Victorian bleakness of a London women’s prison. There is a passage describing the fog that I dearly wish I had written. I would have quoted it for you, but I’m listening to the audiobook!  Waters artfully explores gender in this period, when women in British society had more freedom than ever, but poor women were especially subject to terrible injustices.

On a side note, I’ve also been watching Orange is the New Black, about a contemporary women’s prison and another lesbian romance.  That show has been acclaimed as the best about women on T.V. for all that it does not stereotype or over simplify womanhood.  Waters’ books are equally sophisticated treatments of gender and female identity.  And of course, the show and this book make quite a fun contrast!

Though it’s not a romance, this book and all of Waters’ books explore romantic love, often between women.  And so I will leave you with this lovely quote and then a question.

“Every poor lady that came to me, that touched my hand, that drew a small part of my spirit from me to her—they were only shadows. Aurora, they were shadows of you! I was only seeking you out, as you were seeking me. You were seeking me, your own affinity. And if you let them keep me from you now, I think we shall die!”

I don’t believe in ghosts, but as I read this book and wonder if I would feel as Margaret Prior (Aurora) did, I keep thinking of all the brilliant, sensible people I know who believe in them.

Do you believe in ghosts?

Do you have a favorite ghost story?

2 thoughts on “Affinity by Sarah Waters”