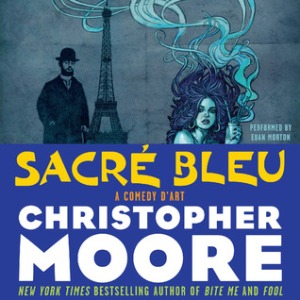 Sorry for the late post today! And my offering is a little outside the box of what we typically review (paranormal romance and urban fantasy), but it is what I’m reading and it has a touch of paranormal, so, we’re cool, right?

I actually haven’t finished Sacré Bleu, I’m about half way through, but am enjoying the heck out of it like I do with most of Christopher Moore’s work. His books were first introduced to me years ago by someone who described him as a cross between Kurt Vonnegut and Douglas Adams, and he’s one of the few authors whose books make me laugh out loud (in a good way).

In this offering, he shows that his literary craft has taken a more serious bent, but it’s still absolutely delightful. We’re thrown into a slightly alternate Paris during the height of the Impressionist art movement, with a cast of characters that include Van Gogh (in the beginning), Toulouse-Lautrec, Renoir, Manet, Monet, and more. Oh and there’s a strange female muse for all these artists (of course there is!) named Bleu who seems to be immortal and able to morph to different places? I don’t know yet what she is, as I’m still armpits-deep into the mystery, but an intriguing mystery it is! The story unfolds at first as humorous historical fiction, but the supernatural/creepy factor seeps in and grabs you as you’re wondering, what the heck is going on? Can’t wait to finish…

Being a fan, I made sure to get the first edition when it came to my bookstore where I work, and it’s even printed in blue ink!

It is the color of the Virgin Mary’s cloak, a dazzling pigment desired by artists, an exquisite hue infused with danger, adventure, and perhaps even the supernatural. It is… Sacré Bleu.

In July 1890, Vincent van Gogh went into a cornfield and shot himself. Or did he? Why would an artist at the height of his creative powers attempt to take his life… and then walk a mile to a doctor’s house for help? Who was the crooked little “color man” Vincent had claimed was stalking him across France? And why had the painter recently become deathly afraid of a certain shade of blue?

These are just a few of the questions confronting Vincent’s friends – baker-turned-painter Lucien Lessard and bon vivant Henri Toulouse-Lautrec – who vow to discover the truth of van Gogh’s untimely death. Their quest will lead them on a surreal odyssey and brothel-crawl deep into the art world of late 19th century Paris.

Oh la la, quelle surprise, and zut alors! A delectable confection of intrigue, passion, and art history – with cancan girls, baguettes, and fine French cognac thrown in for good measure – Sacre Bleu is another masterpiece of wit and wonder from the one, the only, Christopher Moore.

10 thoughts on “What We’re Reading: Sacré Bleu by Christopher Moore”