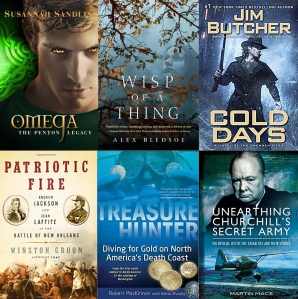 I’m cheating a little today because this running department called “What We’re Reading” is supposed to be a place for us to chat about what’s currently atop our TBR piles. The presumption is that we’re reading somewhere along the paranormal spectrum.

Don’t get me wrong; I read a LOT. But when I’m actively writing, and I’ve been blessed with a very busy year, I deliberately avoid reading, especially in my genres.

So I decided today, in honor of the end of 2013 fast approaching (OMG, where did it go?), I’d share my top nine reads of the year by category. Why nine? I couldn’t come up with a tenth category, of course, silly.

What’s in it for you? The choice of any one of the nine! Yeah, okay, there might be more, but read on….

The Categories and Top Reads (in no order):

1. My Own Books. Yep, we sometimes read our own books. It’s usually painful, but I’m forever looking for an excerpt or re-reading one book to make sure I’m consistent when I write the next in the series. So this year, I read, revised, or wrote, either under my own name or my Susannah Sandlin handle: Omega (Penton 3); Storm Force (Penton spinoff); Jackson Square (Sentinels novella); Elysian Fields (Sentinels 3); Chenoire (standalone novella); Allegiance (Penton 4); and, as of today, about sixty percent of a new series start, Lovely, Dark, and Deep. I can’t name a true favorite; it changes daily. But today, from that list, it’s Allegiance, with Elysian Fields a close second.

2. Research, Sentinels. Even authors of paranormals have to do research (I know, shocking, isn’t it?). So in the category of research for the Sentinels of New Orleans series, I read far, far too many accounts of New Orleans serial killers. I revisited some of the Hurricane Katrina literature. I read five different accounts of the Battle of New Orleans, and particularly about the relationship between unlikely allies Andrew Jackson and the pirate Jean Lafitte. So in this first research category, I’d choose as my favorite read:

* Patriotic Fire: Andrew Jackson and Jean Lafitte at the Battle of New Orleans, by Winston Groom. Beautifully researched and written, Groom offers fascinating insights into these two powerful men who, truth be told, didn’t like each other very much but war does make strange bedfellows, oui?

3. Research, Penton. Set slightly in the future, Penton is not as reality-grounded as the Sentinels stories. I basically took a real community and rebuilt it to my own specifications. So the research for Allegiance honed in on the background of my hero, Cage Reynolds, a psychiatrist who was turned vampire during World War II.  As a result, my pick for the year is:

*Unearthing Churchill’s Secret Army: The Official List of SOE Casualties and their Stories, by John Grehan and Martin Mace. A chilling and horrible look at the little-known special forces of the British Army during WW2.

4. Research, Collectors. The Collectors is a new series whose first book, Lovely, Dark, and Deep, comes out on December 30, assuming I finish writing it (of course I will!). In it, I stray far afield from my familiar ground of Louisiana and Alabama. I also stray far from land. Which means this book has had a very, very heavy research component to it. I’ve stared at maps of Nova Scotia till I’m cross-eyed! But the winner is, hands down:

*Treasure Hunter: Diving for Gold on North America’s Death Coast, by Robert MacKinnon. Only the second research book I’ve read in a while (the Winston Groom being the other) that I read straight through without skimming. Good stuff!

5. Books on Craft. I always want to keep learning, improving, finding new ways to tackle problems common to authors. I’m still looking for a way to avoid that thing that happens about halfway through each and every book, where I’m convinced it’s all crap. But I haven’t found the answer to that yet. The winner?

*Practical Emotional Structure, by Jodi Henley. I’m such a plot-centric writer that I struggle with emotion. I took an online workshop with Jodi, and really liked her practical, straightforward way of looking at emotional theory. More good stuff.

6. Pleasure reads: Fiction. Yeah, I did read a few, although it was in single digits. Sigh. I will do better next year (adds to resolution list):

* Wisp of a Thing, by Alex Bledsoe. I’ve been singing the praises of this “rural fantasy” since I devoured it several months ago. Its predecessor, The Hum and the Shiver, wasn’t shabby, either.

7. Pleasure reads: Non-fiction. My day job went crazy on me last January, and it stayed crazy. That, plus a lot of very tight book deadlines, left me seriously stressed and so I turned to…art. Little-known fact: my first love was drawing, not writing. I worked in charcoals and pencil long before I thought about slinging words for a living. So, thanks to reader extraordinaire Roger, I began dabbling in Zentangle, and my winner in this category is:

* One Zentangle a Day: A 6-Week Course in Creative Drawing, by Beckah Krahula.

[Close runner-up: Trawler, by Redmond O’Hanlon. OMG. O’Hanlon writes travel misadventures that make me howl. His book In Trouble Again: A Journey Between Orinoco and the Amazon is on my read-every-few-years list. It’s like me going on a trip into Borneo—a bloody disaster, in other words. This new one is a trip, and I’m only halfway through.]

8. Periodical Reads. This sort of goes with research, because I read a lot of magazines. Well, I buy a lot of magazines that used to stack up enough to qualify me for an episode of “Hoarders.” Now, I subscribe digitally and can keep my stacks to myself. My current favorite is (cue geek music):

*Archaeology, the Magazine of the Archaeological Institute of America. The current issue has articles on How Rome Crushed Carthage, The Blood of Louis XVI, and Neanderthal Smorgasbord. How can you not love that?

9. Wanna Reads. I optimistically keep buying books from my favorite authors, knowing someday I will read them. This year, of all my as-yet-unread adds, the one that gripes me the most is:

*Cold Days (Dresden Files 14), by Jim Butcher. How, oh how, have I fallen behind with my favorite urban fantasy series? It’s a travesty.

[Apologies to Patricia Briggs, JR Ward, and Simon R Green, whose wonderful series I have also neglected this year.]

And there you have it. See anything you want to read? Tell me which one. And when you win, if you only picked one of these titles to be polite, you can instead have a $10 Amazon gift card  (or Book Depo if you’re outside the U.S.).

29 thoughts on “What We’re Reading? You Might Be Surprised!”