Have you watched BITTEN on Syfy yet? 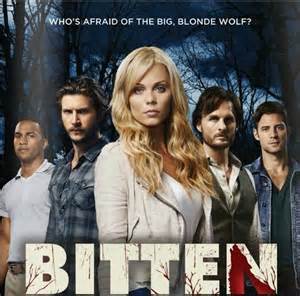 Otherworld Series and I’m really enjoying it overall, however not all her readers feel the same.

You see they’re deviating from the books. It started out in episode two when a minor character died that wasn’t who we book lovers were expecting…

And last week in episode 7 a major character died and Kelley received so many emails she actually posted a blog to remind people that she has nothing to do with the writing on the television show.

It interesting to note, that she sold the rights for the company to make the television, in part, because readers have been asking for tv and movies for years.

Now that it’s there and different, are they still happy it’s on tv?  I guess only time will tell.

This isn’t a new phenomenon. HBO’s True Blood turned a HUGE spotlight onto Charlaine Harris’s Sookie Stackhouse series, bringing new fans to her books, while long time readers of her books cringed as the HBO series deviated from the novel storylines.

AMAZING book, American Gods will be a new series on HBO, but this time it’ll be different.

So will readers be treated to a show that remains true to the book?

I guess we’ll have to wait and see…

You can read more here if you’re curious! 🙂

In the meantime, I wonder how you feel about it?

I typically view TV and movies as a new creation from the books. Many times the writers have ideas for characters that are different from the books we read, but not necessarily bad, just not what we expected.

But how about you? Do you ache for the movie or television series and then cringe when it’s different than the books?

And do you think it’ll make a difference to have the novelist also writing the scripts for episodes?