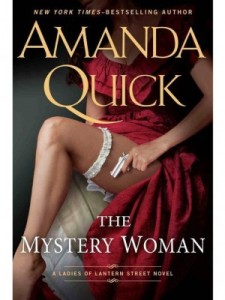 Amanda Quick holds a special place in my romance-reading heart because she was my gateway author. It was her straight-up early historicals that showed me strong, smart female characters with agency, interesting and smart male heroes who were more than Alpha he-mans, engaging external plots, and humor (the last was a big influence on me).

I then followed her into her foray into the paranormal with her Arcane series, and The Mystery Woman is Book 2 in her new Ladies of Lantern Street Victorian paranormals. I admit I didn’t read Book 1, Crystal Gardens, but I didn’t have any trouble diving into the new setup here.

Under the plain gray skirts of Miss Beatrice Lockwood’s gown, a pistol waits at the ready. For Beatrice is a paid companion on a secret mission—and with a secret past—and she must be prepared to fight for her life at any moment.

Yet she is thrown oddly off guard by the fierce-looking man who joins her in foiling a crime outside a fancy ball—and then disappears into the shadows, leaving only his card. His name is Joshua Gage, and he claims to know Beatrice’s employers. Beyond that, he is an enigma with a hypnotically calm voice and an ebony-and-steel cane. . . .

Joshua, who carries out clandestine investigations for the Crown, is equally intrigued. He has a personal interest in Miss Lockwood, a suspected thief and murderer, not to mention a fraudster who claims to have psychical powers. The quest to discover her whereabouts has pulled him away from his mournful impulses to hurl himself into the sea—and engaged his curiosity about the real Beatrice Lockwood, whose spirit, he suspects, is not as delicate as her face and figure.

He does know one thing, though: This flame-haired beauty was present the night Roland Fleming died at the Academy of the Occult. Guilty or not, she is his guide to a trail of blood and blackmail, mesmerism and madness—a path that will lead both of them into the clutches of a killer who calls himself the Bone Man. . . .

I think fans of Quick will enjoy the read, as it delivers her particular brand of Victorian England, spunky heroines, and a hero who respects her, but it didn’t really stand out for me among her body of work. I didn’t feel the humor as much (I remember laughing out loud in some of her others), but I did enjoy her usual heroine-who-sees-more-in-the-hero banter which puzzles the hero. I think the sexual tension fell a little flat for me too. It’s hard to know, though, whether for someone who’s never read Quick, if this would seem fresher for them? It might. Hard to know since I’ve read practically read all of hers, and have re-read several.

Are you an Amanda Quick fan? Do you follow her paranormal series?

2 thoughts on “What We’re Reading: The Mystery Woman by Amanda Quick”