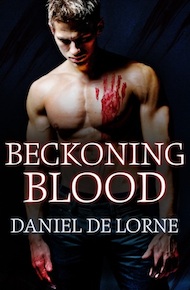 Someone feel free to throw things at me, because I am totally double-dipping here. My co-blogger, Erica, just interviewed Daniel de Lorne a few days ago. This is, however, the book I read most recently. It’s also a new release, and it’s dripping with viscera on every page (an apropos title, yes?) which makes it a hella good fit to cover for this blog. So here we go:

Beckoning Blood was a twisted, stormy, pitch-black ride that spans centuries–starting in France in the 1300’s and going forward to modern-day Australia. It reminded me in many ways of the television shows Oz and Spartacus, or Tiffany Reisz’s Original Sinner’s series – not so much the subject matter since the aforementioned have no vampires – as the way it was told, the way the characters consistently crossed the blurred lines of good and evil (or moral and immoral), and just when you thought someone was about to make positive strides, either they took a turn for the worse or their hopes were ripped away–violently. I found the subject matter of Beckoning Blood to be equally gripping and brutal. And equally fascinating. 😉

The relationship between the two twins, Thierry and Olivier, seems at best co-dependent, and at worst something abusive. Olivier is seductive, sadistic, and murderous in his jealousy toward anybody who takes his twin brother’s attention away from him. He outwardly rebels against the savage man who raised them and will in fact kill anyone who reminds him of their father, but inside he seems to have become exactly the same kind of man, and revels in the fact.

“He recalled nights of sex, blood and exquisite pain to make himself hard. Fortunately, he had plenty to choose from.”

Thierry on the other hand seems to struggle between morality and his base needs as a man and the beast he’s become. He starts the book a man in love, and that love allows him an escape from the brutality of living with his father and working all day in a slaughterhouse. Soon, everything gets ripped away, and all he has left is Olivier.

If you love your fiction dark, bloody, and breathtaking, you will love this book. And it does, for one brother at least, have a hopeful ending. If you’re a reader with trigger issues, I would proceed with caution. As an assault survivor I found Olivier’s acts of sexual violence, while befitting the character, were described in graphic enough detail to make for painful reading. All in all, a captivating experience.

A gripping, blood-drenched saga about twin brothers, the men they love, and the enduring truth that true love never dies  — no matter how many times you kill it.Thierry d’Arjou has but one escape from the daily misery of his work at a medieval abattoir — Etienne de Balthas. But keeping their love a secret triggers a bloody chain of events that condemns Thierry to a monstrous immortality. Thierry quickly learns that to survive his timeless exile, he must hide his sensitive heart from the man who both eases and ensures his loneliness…his twin brother.  Shaped by the fists of a brutal father, Olivier d’Arjou cares for only two things: his own pleasure and his twin. But their sadistic path through centuries is littered with old rivals and new foes, and Olivier must fight for what is rightfully his — Thierry, made immortal just for him.

One thought on “What We’re Reading: Beckoning Blood”