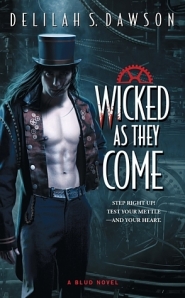 Delilah S. Dawson is a native of Roswell, Georgia and the author of the paranormal romance Blud series for Pocket, including WICKED AS THEY COME and WICKED AS SHE WANTS and two e-novellas, THE MYSTERIOUS MADAM MORPHO and THE PECULIAR PETS OF MISS PLEASANCE. Her short story THE THREE LIVES OF LYDIA is in Gallery’s Carniepunk anthology, and her e-novella SHADOWMAN: FOLLOW ME BOY was commissioned by Amazon’s Kindle Worlds program. Her first YA, a creepy paranormal called SERVANTS OF THE STORM will be available in  August 2014 from Simon Pulse. RT Book Reviews has called her “a wonderfully fresh new voice!” and “on the fast track to the top of the genre!” and awarded WICKED AS SHE WANTS the May Seal of Excellence.
Delilah is Associate Editor at http://www.CoolMomPicks.com and http://www.CoolMomTech.com. She’s a geek of all trades, a synesthete, and the sort of person who saw Spawn in the theater and made other people angry by laughing. Find her online at http://www.delilahsdawson.com. Bring cupcakes.
Twitter | Facebook | Simon and Schuster Author Portal | Pinterest | tumblr

One thought on “An Interview with Delilah S. Dawson”

or follow our tribe on triberr!
Join 4,108 other followers