I’m taking our tagline’s advice today and “breaking rules” to share my thoughts on a romantic suspense novel (can’t help it; it’s also “stuffed full of awesome” as our tagline goes). It’s a book by our very own Suzanne Johnson, written under her pen name Susannah Sandlin.

Step aside, Indiana Jones, there’s a new adventure in town… 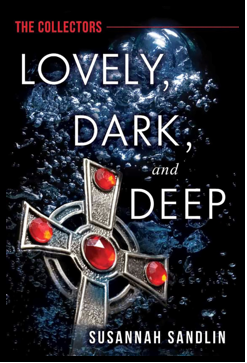 Action, adventure, treasure hunting, love, Susannah Sandlin’s Lovely, Dark, and Deep has all that…and a big dog, too. But let’s start at the beginning.

The Collectors (aka C7) are a group of wealthy, powerful men obsessed with obtaining rare treasures using any means necessary. This includes forcing innocent people, such as our heroine — biologist and gator wrangler Gillian — to play the group’s twisted “game.” The story’s C7 villain, a politician with too much money and zero sense of decency, threatens Gillian’s family and leaves her no choice but to team up with down-on-his-luck professional diver Shane to acquire a lost Knights Templar treasure: a cross, allegedly stolen by Gillian’s ancestor and lost when the ship sunk at sea off the coast of Canada.

What follows is one heck of an enjoyable adventure ride as Gillian and Shane assemble their treasure hunting team while having their every step monitored by the villain’s minions. And those henchmen? They do more than watch. No spoilers here, but I’ll say the hits keep coming and coming, creating oodles of addictive tension in the story. Yes, folks, it’s a high stakes game.

While the action is superb from start to finish, it’s Sandlin’s crisp writing style, tight plot (with clever twists), lush and vivid settings (both in and out of the water), and cast of unique characters that truly put this story in the 5-star category. Gillian is a tough, smart, kindhearted heroine who captures and relocates alligators. You don’t get much more unique than that! Hero Shane is wonderfully flawed with a heart of gold, endearing in his insecurity (haunted by a past diving incident). It was a pleasure to watch these two overcome their pasts, and work hard to solve their current dilemma while also falling in love. The secondary characters, too, make their mark on the story, such as Shane’s best pal Jagger, a Rolling Stones fanatic with a penchant for singing anytime, anywhere. And let’s not forget Tank, Gillian’s dog: the big beast hates Shane and provides some fun, laugh-out-loud moments for the reader.

Meet the Cast
You can meet two of Sandlin’s characters, Shane and Jagger, for yourself in this character interview. Here’s the first question (read the rest of it here.)

What is your name? Do you have a nickname?

Shane: I can’t believe you just put your name out on a blog, CAL. Now everybody’ll know it. I’m Shane Burke, and I don’t have a nickname.

Jagger: Only popular people have nicknames.

He wasn’t sure what woke him, but the first thing Shane Burke saw when he cracked open his eyelids was the bottle of Jack Daniel’s, tipped over and resting on its side. He could’ve sworn he finished it off last night but there was at least an inch of rich amber liquid still resting inside.

Good. Now he didn’t have to wonder what he’d have for breakfast.

Obviously, he was starting his Saturday morning with hallucinations.

Only one good solution for that. He dangled an arm off the side of his bed and almost had his fingers wrapped around the neck of the bottle when one of the leather sandals kicked his buddy Jack Daniel’s under the bed, clipping his hand in the process.

“Ow.” Hallucinations didn’t take his booze and kick him in the knuckles.

Ignoring the throbbing in his hand and the stabs of hangover agony behind his eyeballs, Shane rolled onto his back and squinted at the rest of his non-hallucination.

Shoulder-length hair that fell in a sheen of dark chestnut brown, fair skin, fierce brown eyes, red lips compressed in a tight line, black skirt and white blouse, big briefcase-style purse. Had he picked her up at Harley’s last night? If so, he had to cut back on the sauce.

“Sorry,” he mumbled. “I forgot your name.” Pity, ’cause she was a hot little number, way classier than the regulars at Harley’s. It’s not like he got laid so often that he could afford to forget it when he did.

“We haven’t met.” She propped her hands on her hips and muttered something that sounded like, “And you’re supposed to help me?”

Help her with what? Wait, maybe she was a charter. Had he chartered The Evangeline out to a tour group or fishing party today? Surely he’d remember if there was money coming in.

Color him officially confused. He struggled to a seated position and gave her another look. “What am I supposed to help you with?”

She crossed her arms and raked a ball-shriveling gaze the length of his body. “I came here to offer you a job, but I don’t think you’re up to it.”

He tugged the sheet up in self-defense. “I’m not at my best. Ever consider making an appointment? Not dropping in at the crack of dawn?” He had no idea what time it was but it couldn’t be that late.

“It’s past noon. And I didn’t figure, given your financial situation, that you’d be so picky about what time of day someone offered you money.” She shook her head. “Never mind. This was a mistake.”

She banged her head on the low doorway out of the master cabin, which served her right, the sanctimonious shrew.

The Collectors, Book 1
by Susannah Sandlin

From award-winning author Susannah Sandlin comes a heart-pounding romantic thriller that pits a quick-witted scientist and a scarred ex–combat diver against a ruthless billionaire treasure hunter with ties to the White House.

When biologist Gillian Campbell makes an offhand comment about a family curse during a TV interview, she has no idea what her words will set in motion. Within days, Gillian finds herself at the mercy of a member of the C7, a secretive international group of power brokers with a dangerous game: competing to find the world’s most elusive treasures, no matter the cost, in money or in lives.

To save her family, Gillian teams up with Shane Burke, a former elite diver who’s lost his way, navigating the brutal “death coast” of the North Atlantic to find what the collector seeks: the legendary Ruby Cross of the Knights Templars, stolen by Gillian’s ancestor and lost at sea four hundred years ago.