Of all the paranormal beasties out there, zombies are my least favorite. (Sorry, zombies.) I’ve never been much of a horror fan, and after a while, the story of grim survival and inevitable death against the specter of mindless ravening beasts gets… wearing. But what I do like is smartly written fantasy that explores the moral tensions of hard decisions and taps into the scary, primal parts of being human. And that’s just what Eleri Stone’s zombie paranormal romance, Reaper’s Touch, does.

Eleri very gamely (and probably not knowing what she was getting in to) agreed to join me on Paranormal Unbound to answer all my nosy questions about her book and its unique world. 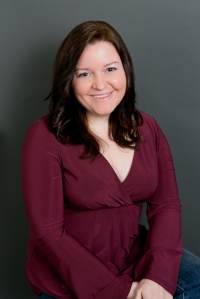 A.J.: First things first—can you give us a quick summary of Reaper’s Touch?

Eleri: Sure! Reaper’s Touch is set in an alternate version of the wild west where cannibalistic monsters roam the plains. About two hundred years before the story opens, a plague sweeps through the Americas decimating much of the population. It’s a parasitic infection spread through contact with bodily fluids. In people who survive the initial infection, the parasite takes over their nervous system, turning them into Reapers—violently aggressive, nearly impossible to kill, flesh-eating monsters who can pass the infection by bite. In Reaper’s Touch, the plains are nearly deserted and most people live as far north as they can get or in the mountains because cold kills the parasite. They’ve adapted to use airships to travel between the eastern and western mountain ranges. They’ve figured out how to identify people who are immune to infection and require that those people become Rangers who defend the border towns and the food supply.

The hero of Reaper’s Touch, Jake, is a Reaper, but he’s extremely old and has managed to wrest some control from the parasite, enough to pass as a normal man for periods of time. The heroine, Abby, is a Ranger whose sole purpose is to kill Reapers (and reproduce the next generation of Rangers). Jake was a test subject in a research facility where scientists were working on a cure for the Reaper infection. Shortly after scientists announce that they’ve discovered a cure, the research facility is destroyed and the cure is considered lost. It’s not lost, not completely, but Jake needs Abby’s help to recover it. 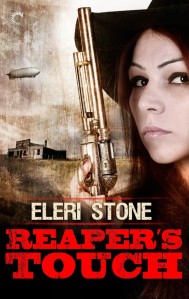 A.J.: That description gave us a hint of the world-building in Reaper’s Touch, which is truly fascinating. One of the things I enjoyed was the way the story let us into that world so simply at first. The zombie apocalypse has happened, and the immune Rangers help keep the monsters at bay. It’s a fairly simple conflict. But as the story develops, so does the world, and we learn more and more about the political and social complexity of this new reality. Did these rules develop for you as you were writing, or did you have a complete idea of what the society of Reaper’s Touch was like before you started out?

Eleri: Both? The original premise of Reaper’s Touch was: What if early explorers of the Americas discovered the fountain of youth but found that immortality came at a terrible price? I abandoned the fountain of youth idea in favor of the plague, but the result was essentially the same—flesh-eating monsters roaming the plains. I knew the parasite could tolerate heat but not cold, which meant that Reapers migrated with the weather and the mountains were relatively safe. The wealthy claimed the mountain peaks early and the poor people were stuck on the border, so there’s a pretty sharp class divide. I decided on the city-state form of government beforehand, named the mountain cities and gave them each their own area of specialization. For example, Ballonet is where most of the shipping families settled, but on Stormking anything goes. The fort system I had pretty well worked out too. So the big things? Yeah, that was all plotted in advance. But the smaller histories and all of the characters developed as I went along.

A.J.: The rules of the world set up inherent tension between Abby and Jake. Jake is a sentient zombie, and Abby is immune for his bite—and one of the human sworn to kill his kind. There’s no quick resolution to the fact that they are natural enemies. Can you tell us a little bit about how you developed their “enemies-to-lovers” relationship?

Eleri: Most of Abby’s conflict stems from the fact that when she first meets Jake, she thinks he’s a man. She’s attracted to him, and he saves her life. Once she discovers what he really is, she’s appalled, but there’s still always a part of her that thinks of him as a man. Without the anchor point of their first meeting, I don’t think I could’ve swung it. Jake is never confused about how hopeless their relationship is. From there, it’s partnership to respect to love.

A.J.: That’s an important point, and I can see how having that initial contact gives her a way to see him not just as a Reaper. As I was reading, it struck me that Reaper’s Touch does what a lot of vampire romances tend to do, but bigger. There’s the whole dynamic of lust and fear and death, but it feels so much more visceral, probably because we get so many vivid images of the ravening, thoughtless, inhuman monsters most Reapers seem to be. It was all too easy to imagine our hero losing control, and the consequences were truly gruesome. What drew you to writing a zombie story?

Eleri: I’ve always found zombies fascinating. I think it’s interesting how they’ve changed over the years, from mind-controlled Voodoo zombies to the decomposing Romero ghouls more common today. Reapers aren’t traditional zombies in that they aren’t physically dead, though their loved ones consider them dead as soon as they’re bitten. They’re more along the lines of the monsters in 28 Days Later than Night of the Living Dead—mindless, cannibalistic, aggressive and infectious.

A.J.: We talk a lot, especially in urban fantasy, about strong-but-vulnerable heroines. I’m sure that label means different things to different readers, but Abby exemplifies it for me. She’s confident in many ways, but she needs protection and reassurance in others, and this combination made her feel very believable. How do you see Abby?

What do you think her most important qualities are?

Eleri: Abby is tough. Rangers are basically killers, and she’s very good at the job. But she doesn’t really like the job, you know? The way she justifies it in her head is by telling herself that Reapers aren’t men anymore, they’re monsters…which is why meeting Jake and being confronted with the reality of sentient Reapers is so difficult for her. She’s strong because she has to be in order to survive this world. And she doesn’t give up, not on herself and not on the people she loves. I think her stubborn perseverance is her most endearing (and frustrating) trait.

A.J.: Abby is definitely tenacious! Tell us a little bit about the sequel, Gun Shy.

Eleri: Gun Shy takes place after the cure. Instead of killing all Reapers on sight, Rangers now attempt to cure them first. It’s a good thing, but it also makes their job more complicated. The scientists can’t keep up with demand for the serum, so when the fort’s entire stock is stolen it’s a big blow. Jane, a woman who works at the fort, witnesses the theft and recognizes the man behind it. She offers to accompany Lyle into Stormking (outlaw) territory to help him get it back. They also need to get to the bottom of why a bunch of Scrapers living safely tucked away in the mountains want the cure in the first place. Gun Shy touches a little more on the political side of things as tension between the Rangers and Scrapers start to heat up. The romance between Lyle and Jane is a friends-to-lovers story. Unrequited love on Lyle’s side, and a really messy history to work through on Jane’s. 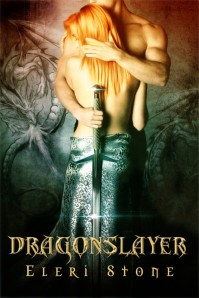 A.J.: Oh, I’m definitely looking forward to reading this! What’s next for you? Any new projects you can tell us about?

Eleri: The third (and final) book in the Twilight of the Gods series, Dragonslayer, comes out Nov 10. I have a fantasy romance novella coming up in Feb. And then there’ll be two more full-length books in the Reaper series, coming Spring and Summer 2015.

A.J.: Ooo, exciting. (And I’m selfishly glad to hear there will be more Reaper books.) Thanks for joining us here on Paranormal Unbound!

Eleri: Thanks so much for having me!

If you want to check out Reaper’s Touch (and I highly recommend that you do!), it’s only $0.99 for a very limited time, so grab it while you can!